What the Transition movement does incredibly
well is small-scale experiments which are practical,
which resonate with local people, which look as if they’re
doable, and that can engage people at a practical and
meaningful level. It connects up the big issues and the
local issues and shows you that change can happen
at a local level.(1)

Our April/May e-news includes information about:

Where: Ray Bradfield Room, Castlemaine, east side of Victory Park.

How could everyone be better off through an economic transition in our town and region, so we have a more resilient, inclusive, ecologically-wise and regenerative community? 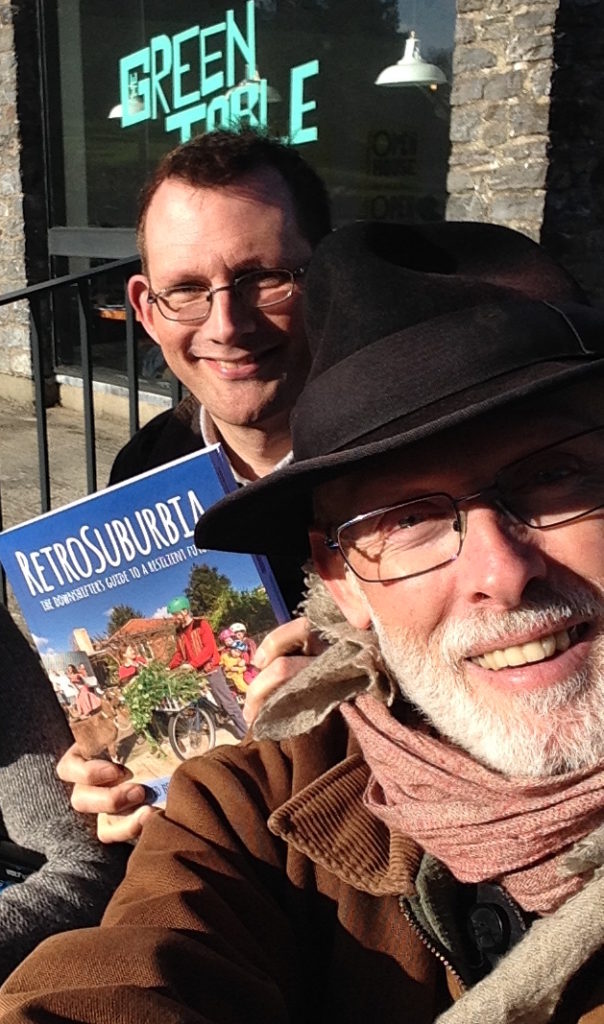 Our area has thousands of small businesses, many of them which aim for the REconomy model of economic regeneration that creates an abundance of opportunity for people to meet their needs in ways that:

Building on his experience with Transition and the REconomy project in England, Ian Lillington will present ideas on developing our local economy in a sustainable direction.  What can we do better?  How do we build a truly regenerative economy?  Your ideas and input are welcome.

Ian Lillington is an International Permaculture Educator, based in Castlemaine, Australia and with experience in SE Asia and Europe.  He recently led a course in Green Education at Green School in Bali and a Permaculture Design Course in Shanghai and Melbourne.

Ian is also a networker, author and sustainability activist and was recently in England catching up with local economic initiatives there.  At home in Castlemaine, Ian and his partner Marita built a 10-star home, maximum energy efficiency rating, and do eco-renovations of older houses by adding insulation, solar panels, rainwater tanks and orchards.

Ian’s book is an introduction to permaculture – “The Holistic Life – a Beginners’ Guide to Permaculture”. He is also editor of many of David Holmgren’s books, especially ‘Permaculture Principles and Pathways Beyond Sustainability’.  http://permanentpublications.co.uk/port/the-holistic-life-sustainability-through-permaculture-by-ian-lillington/]

Ian featured in the anthology – “Permaculture Pioneers” and wrote the chapter on Permaculture in the “Encyclopedia of Sustainability”.

Ian specializes in teaching about the 3 ethics, 7 domains and 12 principles of permaculture as well as the interaction between permaculture, social and economic systems.

Blockade film with Q & A in Daylesford 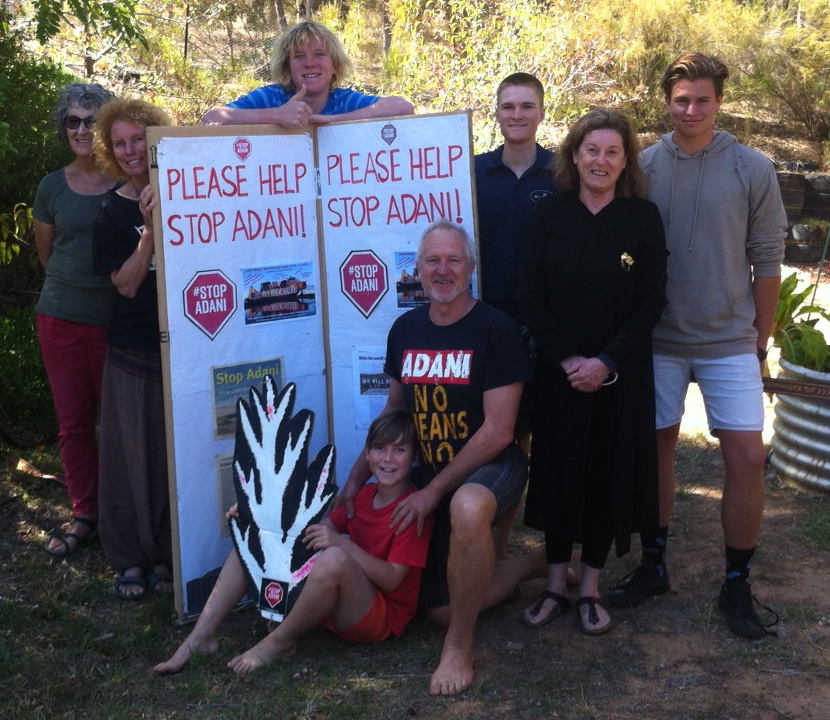 A group of eleven Mount Alexander Shire residents are heading up to Townsville next month to take part in the blockade of the proposed Adani coal mine and railway. They include a diversity of age and experience; two grandmothers, three parents, two VCE students, three middle high schoolers and one primary school student. All of those going are compelled to take action and some are considering risking arrest and high fines for civil disobedience to stop this proposed mine.

Castlemaine Secondary College VCE student Charlie Bell Wilcock, one of the young men involved asked “Why are our politicians supporting Adani’s mine when the vast majority of Australians don’t want it, and scientists are urging us to keep coal in the ground to avoid more dangerous climate change? We have written letters, taken part in inquiries, gone to meetings, spoken out and voted, but our MPs aren’t listening“

“It seems like it is up to young people, ordinary everyday people, to put ourselves in the way to stop a billionaire building the largest coal mine in the southern hemisphere and wrecking the reef and my future” he explained.

The impact of climate change is obvious and being noted across the world. Globally we are witnessing worsening droughts, floods and bushfires. Our Pacific neighbours fight to protect their land from sea level rise and sadly already half the corals in the Great Barrier Reef are dead.

Liz Heath, grandmother from Chewton explained “People from across Australia are travelling to Bowen to blockade Adani’s coal port and railway plans. Every week now for months people have been taking actions to stop the coal exports from the Adani owned Abbott Point terminal or stopping the construction work on the rail link needed for the mine. “

“Some of those people have been fined large sums of money but we aren’t deterred, we are looking forward to doing our part to stop this mine” she concluded.

For more information, to donate funds or to interview any of the blockaders contact Dean Bridgfoot 0403 160 091 or centralvicclimateaction@gmail.com

Blockade film with Q & A in Daylesford 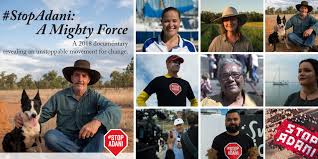 For those who missed the Castlemaine screening in March, this 30 minute documentary film: #StopAdani: A Mighty Force will be screened again, this time in Daylesford on Friday May 18th, followed by Q&A with some of our central Victorians recently returned from the blockade in Queensland.

The film reveals an unstoppable movement for change in action and captures the power and passion of people taking extraordinary action to stop Adani from building one of the biggest coal mines in the world. From remote central Queensland where the mine is proposed to be built, to rallies in metropolitan Melbourne and Sydney, this David and Goliath battle is one of the most determined and focused campaigns in Australia’s recent history.

Juru Traditional Elder Carol Prior says about the protest movement, “Adani is dealing with a mighty force. And the more it grows, the harder we’ll be to beat.”

Note- change of venue for April

Castlemaine Repair Cafe on Sunday 29th April is in the Faulder Watson Hall (Barker St) this month, 10am to 1.00pm, then Boomerang Bags sewing til 4pm. There’s a drill workshop so anyone wanting to know how to use one and information on what sort to buy etc can do that. Booking would be good for an idea of numbers through Chris on 54705508, Facebook Castlemaine Repair cafe or website castlemainerepaircafe.wordpress.com  Tea, plunger coffee and snacks are available for a small donation.
Back to the Ray Bradfield room in May. Same details but no drill workshop. 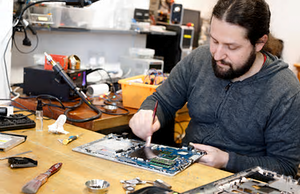 An extract below from: Can we fix it? The repair cafes waging war on throwaway culture

A vacuum cleaner, a hair straightener, a laptop, Christmas lights, an e-reader, a blender, a kettle, two bags, a pair of jeans, a remote-control helicopter, a spoon, a dining-room chair, a lamp and hair clippers. All broken.

It sounds like a pile of things that you’d stick in boxes and take to the tip. In fact, it’s a list of things mended in a single afternoon by British volunteers determined to get people to stop throwing stuff away.

This is the Reading Repair Cafe, part of a burgeoning international network aimed at confronting a world of stuff, of white goods littering dumps in west Africa and trash swilling through the oceans in huge gyres.

(With thanks to Chris Hooper)

Tiny homes, co-housing and shared living on a shared planet

There’s a Tiny Homes event during Melbourne Knowledge week. You can attend on any of the following days — 11–13 May: https://mkw.melbourne.vic.gov.au/events/tiny-solutions/

For more info and to book:

Upcoming events: June 2018
Hear about Anitra Nelson’s book on eco-collaborative housing Small is Necessary: Shared Living on a Shared Planet. Author Anitra Nelson will talk at Localising Leanganook’s  community conversation in the Ray Bradfield Room, Castlemaine at 5.00pm Sunday 17th June.
The following week, Anitra will be in conversation with Mount Alexander Shire Mayor Bronwen Machin — who lives in a small Passivhaus written about in the book — at the Castlemaine Library 5.30–6.30pm on Thursday 21 June. The book is available at these events as well as Stonemans Bookroom and the Castlemaine library.
(With thanks to Anitra Nelson)

How can we do democracy better? 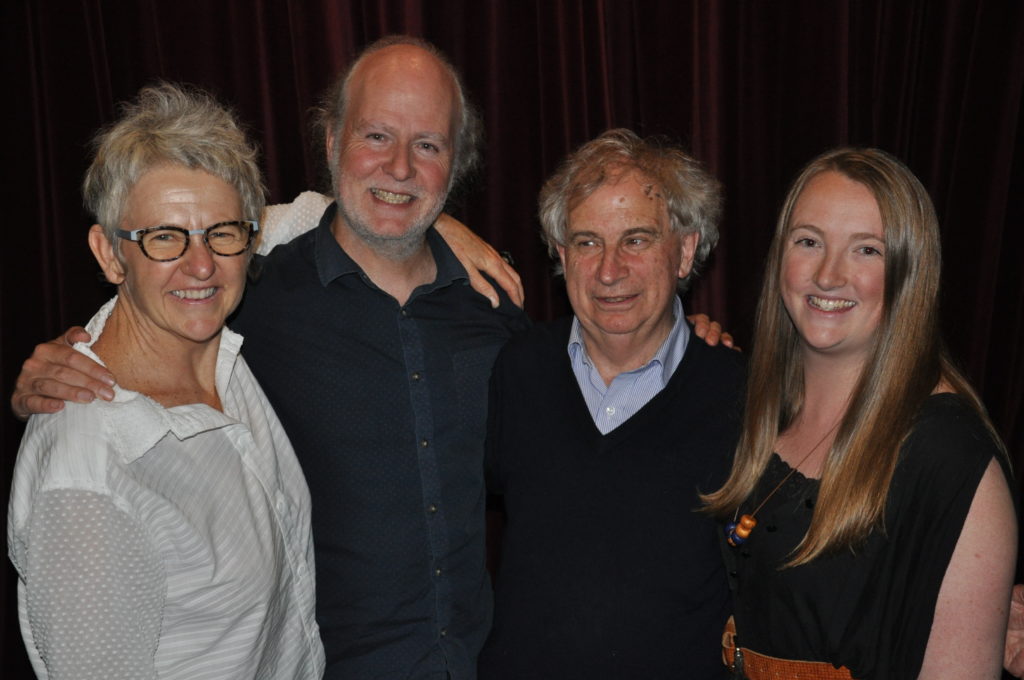 Around 100 locals gathered to join Richard Walsh, Genevieve Barlow and Cam Walker in a hearty conversation around how we might do democracy better. The conversation was ably facilitated by Lexi Randall-L’Estrange and hosted by Localising Leanganook and Democracy4Dinner.

A video of the conversation, including questions, is in the final stages of preparation by local film makers-Stewart and Cath from People Pictures. Thanks to newDemocracy Foundation for their sponsorship. Go to Localising Leanganook and Democracy for Dinner  for a link to the video, available on our websites within the next week or two.

After the event, Richard Walsh emailed “I hope it was obvious that I enjoyed the evening very much and of course I hope it can have a lasting and beneficial after-effect. I was totally bewitched by your town and the people I met. I hope I will get the chance to come again some time and catch up with you all.”

Gen Barlow wrote to us the next day “Thank you for creating the space for people to talk about democracy last night. Is there a way forward beyond talk? I feel inspired to find out more about the new Democracy Foundation. Cam’s idea for a local community council developing a long-term vision seems tangible. Is the ground ripe for this yet? Is there agreement right across all sectors that a long-term vision is needed? Getting agreement on that seems the first step. Hearing how the Voices for Indi went about change in their area would be instructive.”

Cam Walker’s idea of building an inspiring, integrated vision for our community resonated strongly with the audience and organisers and this is on the agenda for the working group, as is engaging with Voices for Indi to explore what a Voices for …. approach could look like across central Victoria. If you want to be part of the Democracy Working Group and move these ideas forward, sign up here. We will organise a get together next month to talk about next steps.

We welcome your feedback via this quick survey. 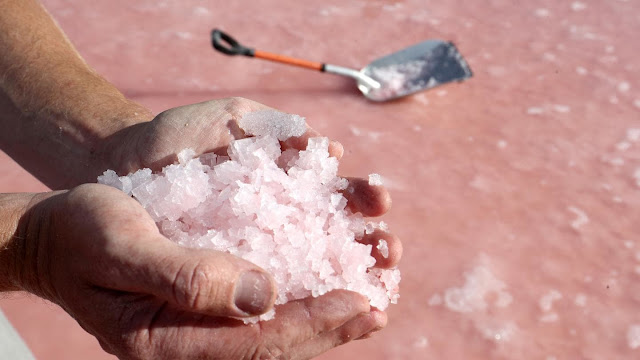 Whatever you use your salt for, you are invited to join the Daylesford Culture Club community fermenters on our salt collecting adventure on Saturday May 5.

Here’s the plan
Tickets are $30 and are limited to 57.
Book your seat on the bus here.
What to bring?

(With thanks to Meg Ulman) 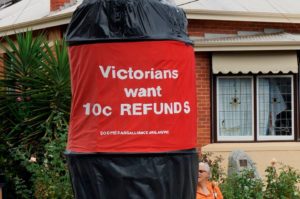 On Wednesday April 11th in the ‘Maine street, there was a convergence of folk to support The Big Bottle Tour as it shuddered its way through Castlemaine on the way to Ballarat. Three tired campaigners from The Boomerang Alliance did a wonderful job of ‘up-righting’ their battered giant bottle, bringing it to prominence – you could not miss it!

The purpose? To promote a Container Deposit Scheme for Victoria.  They were hosted and joined by Plastic Bag Free Castlemaine who took the opportunity to make a demonstration about the problem of soft plastics, taking on to fill a trailer load in one hour, to highlight the magnitude of the problem and encourage peeps to think again before picking up that packaged item, or saying yes to a plastic bag. 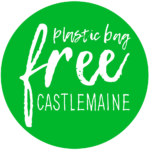 Having completed over 2,000kms around Victoria, the Boomerang Alliance folk were overwhelmed at the turn out in Castlemaine, and much buoyed into the homeward journey where the containers will be delivered to Daniel Andrews.  I heard a whisper that a drop off to local member Maree Edwards eased the burden down to Melbourne, keeping alive the spirit of direct action and the power of symbolic action to awaken settled minds.
Castlemaine – and surrounds- continues to come together to take action on things that matter and I take pleasure in being a local.
(With thanks to Lucy Young)

There are still two weekends left for the Open Studios program across our region- April 28/29th and May 5/6th.  Visit the studios of ceramicists, photographers, sculptors, painters, print makers and much more. 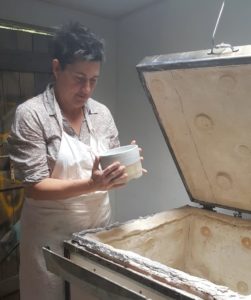 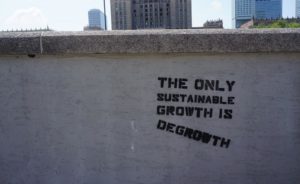