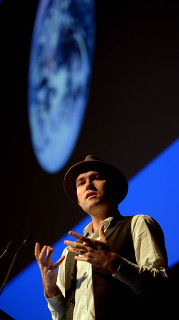 What: The Commons, the Cooperative and the Wardrobe

This event is the next in a series organised by Localising Leanganook (Dja Dja Warrung name for Mt Alexander) as follow on from some of the hearty presentations and discussion generated by the Local Lives Global Matters conference, hosted by the Castlemaine community in October 2015.

The speaker will be Ian McBurney on “The Commons, the Cooperative and the Wardrobe”.

Ian’s short talk will set a framework for a hearty and challenging discussion about ownership, money, stuff, the future of work, the mythical Mr. Jobson Growth, relocalisation and respect for people and place.

“It’s 2017, the planet is still being wrecked, wealth inequality is staggering and the economy is stagnating. No wonder politics is either inaction or fundamentalism. The stories we tell about who we are and how we work together are broken. What new stories can we create? Once upon a time Lucy stepped through the Wardrobe into a whole new world. Let’s do the same with the Commons and the Cooperative.”

The talk and discussion will be followed by a meal (please bring a plate to share if you can) where we can continue our talking informally.

A Gold coin donation will be welcomed if you can.

Note: April 2 is the first day after the end of daylight saving!

Ian is an ecological sustainability practitioner who has inspired and enabled tens of thousands in business, manufacturing, government, schools and communities to move towards a better future. He believes passionately that at this time in history when every natural system is in decline, it is people and therefore culture change that will gift us a sustainable society. That society will be better for us in nearly every way. We’ll be more local and connected, happier, healthier, more profitable and more proud of who we are.

How do we inspire others around us, Ian asks? Ian spent 5 years in the early 2000s at Vox Bandicoot in Melbourne, delivering the famous environmental theatre program to ten thousand students, workplace culture change training to six thousand staff in local government and manufacturing. He was responsible for the expansion and delivery of the Sustainability Street Approach to over 40 local governments around Australia. Ian helped to establish the Bendigo Sustainability Group in 2007, Bendigo a Thinking City in 2012 and the Synergize CoWorking Hub in 2013. He published Talking ecoLogical in 2014. He has worked with over 60 local governments in four states and two countries. You can find him on twitter, facebook, Linkedin, or at www.ianmcburney.com. He is currently working on www.bhive.coop, a collaborative economy platform for Bendigo.